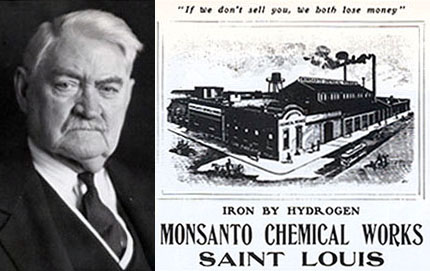 Of all the mega-corps running amok, Monsanto has consistently outperformed its rivals, earning the crown as “most evil corporation on Earth!” Not content to simply rest upon its throne of destruction, it remains focused on newer, more scientifically innovative ways to harm the planet and its people.

As true champions of evil, they won’t stop until…well, until they’re stopped! But what is Monsanto and how did they get to be so obscenely evil in the first place? I think that’s the best place to start this journey, so grab a few non-GMO snacks or beverages and let’s go for a ride into the deep, murky sewers of their dark past.

1901: The company is founded by John Francis Queeny, a member of the Knights of Malta, a thirty year pharmaceutical veteran married to Olga Mendez Monsanto, for which Monsanto Chemical Works is named. The company’s first product is chemical saccharin, sold to Coca-Cola as an artificial sweetener.

Even then, the government knew saccharin was poisonous and sued to stop its manufacture but lost in court, thus opening the Monsanto Pandora’s Box to begin poisoning the world through the soft drink.

1920s: Monsanto expands into industrial chemicals and drugs, becoming the world’s largest maker of aspirin, acetylsalicyclic acid, (toxic of course). This is also the time when things began to go horribly wrong for the planet in a hurry with the introduction of their polychlorinated biphenyls (PCBs).

Even though PCBs were eventually banned after fifty years for causing such devastation, it is still present in just about all animal and human blood and tissue cells across the globe. Documents introduced in court later showed Monsanto was fully aware of the deadly effects, but criminally hid them from the public to keep the PCB gravy-train going full speed!

1940s: They begin research on uranium to be used for the Manhattan Project’s first atomic bomb, which would later be dropped on Hiroshima and Nagasaki, killing hundreds of thousands of Japanese, Korean and US Military servicemen and poisoning millions more.

The company continues its unabated killing spree by creating pesticides for agriculture containing deadly dioxin, which poisons the food and water supplies. It was later discovered Monsanto failed to disclose that dioxin was used in a wide range of their products because doing so would force them to acknowledge that it had created an environmental Hell on Earth.

1960s: Monsanto, along with chemical partner-in-crime DOW Chemical, produces dioxin-laced Agent Orange for use in the U.S.’s Vietnam invasion.

Monsanto partners with I.G. Farben, makers of Bayer aspirin and the Third Reich’s go-to chemical manufacturer producing deadly Zyklon-B gas during World War II. Together, the companies use their collective expertise to introduce aspartame, another extremely deadly neurotoxin, into the food supply.

1970s: Monsanto partner, G.D. Searle, produces numerous internal studies which claim aspartame to be safe, while the FDA’s own scientific research clearly reveals that aspartame causes tumors and massive holes in the brains of rats, before killing them.

1980s: Amid indisputable research that reveals the toxic effects of aspartame NutraSweet is approved for human consumption.

Coke leads the way once again and begins poisoning Diet Coke drinkers with aspartame in 1983.

The diabolical company begins producing GMO crops that are tolerant to their toxic herbicide Roundup. Roundup-ready canola oil (rapeseed), soybeans, corn and BT cotton begin hitting the market, advertised as being safer, healthier alternatives to their organic non-GMO rivals. Apparently, the propaganda worked as today over 80% of canola on the market is their GMO variety.

Because these GM crops have been engineered to ‘self-pollinate,’ they do not need nature or bees to do that for them. There is a very dark side agenda to this and that is to wipe out the world’s bee population.

Monsanto knows that birds and especially bees, throw a wrench into their monopoly due to their ability to pollinate plants, thus naturally creating foods outside of the company’s “full domination control agenda.” When bees attempt to pollinate a GM plant or flower, it gets poisoned and dies. In fact, the bee colony collapse was recognized and has been going on since GM crops were first introduced.

Because Roundup-ready crops are engineered to be toxic pesticides masquerading as food, they have been banned in the EU, but not in America! Is there any connection between that and the fact that Americans, despite the high cost and availability of healthcare, are collectively the sickest people in the world? Of course not!

As was Monsanto’s plan from the beginning, all non-Monsanto crops would be destroyed, forcing farmers the world over to use only its toxic terminator seeds. And Monsanto made sure farmers who refused to come into the fold were driven out of business or sued when windblown terminator seeds poisoned organic farms.

This gave the company a virtual monopoly as terminator seed crops and Roundup worked hand in glove with each other as GMO crops could not survive in a non-chemical environment so farmers were forced to buy both.

Their next step was to spend billions globally buying up as many seed companies as possible and transitioning them into terminator seed companies in an effort to wipe out any rivals and eliminate organic foods off the face of the earth. In Monsanto’s view, all foods must be under their full control and genetically modified or they are not safe to eat!

2000s: By this time Monsanto controls the largest share of the global GMO market. In turn, the US gov’t spends hundreds of millions to fund aerial spraying of Roundup, causing massive environmental devastation. Fish and animals by the thousands die within days of spraying as respiratory ailments and cancer deaths in humans spike tremendously. But this is all considered an unusual coincidence so the spraying continues. If you thought Monsanto and the FDA were one and the same, well you can add the gov’t to that sorry list now.

The world has begun to awaken to the fact that the corporate monster does not want control over the global production of food simply for profit’s sake. No, it’s become clear by over a century of death & destruction that the primary goal is to destroy human health and the environment, turning the world into a Mon-Satanic Hell on Earth!