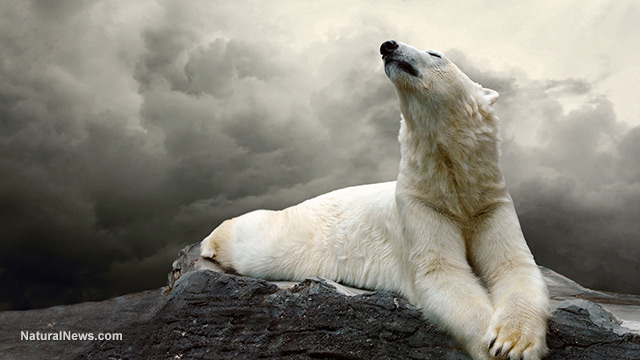 Ten years after the release of Al Gore’s Inconvenient Truth, none of the film’s dire climate change predictions have come to pass. However, in the decade since the documentary was produced, its creator has raked in millions of dollars from the entire “global warming” scam, and is now poised to become “our first carbon billionaire.”

In the 2006 film, Gore made a number of wild claims regarding what we could expect to see happening over the next few years due to global warming, but virtually all of his alarmist prognostications have turned out to be false.

For instance, the film predicted that that the Arctic could become ice-free within the next decades, and that polar bears would begin drowning. Both claims were untrue.

As reported by Investor’s Business Daily:
“In the mid- to late-2000s, Gore repeatedly predicted that an ice-free Arctic Ocean was coming soon. But as usual, his fortune-telling was wrong. By 2014, Arctic ice had grown thicker and covered a greater area than it did when he made his prediction.”

And the polar bears?

Another prediction made in the film was that Mt. Kilimanjaro would be snow-free “within the decade.” But in fact:

“In 2014, ecologists actually monitoring Kilimanjaro’s snowpack found it was not even close to being gone. It may have shrunk a little, but ecologists were confident it would be around for the foreseeable future.”

Extreme weather has failed to materialize

“Gore’s claim is more hype than actual science, since storms aren’t more extreme since 2006. In fact, not even findings from the United Nations’s Intergovernmental Panel on Climate Change (IPCC) support Gore’s claim.

“The IPCC found in 2013 there ‘is limited evidence of changes in extremes associated with other climate variables since the mid-20th century.’ The IPCC also found ‘no significant observed trends in global tropical cyclone frequency over the past century’ and ‘[n]o robust trends in annual numbers of tropical storms, hurricanes and major hurricanes counts have been identified over the past 100 years in the North Atlantic basin.’

“Gore should probably take these findings seriously since he shared the Nobel Prize in 2007 with the IPCC for its work on global warming.”

Although Gore’s claims have been thoroughly debunked by a number of experts, he has been quietly amassing a huge fortune based on the climate change scam.

Mad World News reports:
“Gore’s wealth went from $700,000 in 2000 to an estimated net worth of $172.5 million by 2015 thanks to his environmentalist activism. Gore and the former chief of Goldman Sachs Asset Management made nearly $218 million in profits between 2008 and 2011 from a carbon trading company they co-founded. By 2008, Gore was able to put a whopping $35 million into hedge funds and other investments.”

There is a growing consensus that Al Gore has perpetrated a massive fraud against the American public, and many believe that he should be held accountable.

From Conservative Base:
“It has been reported that 30,000 scientists, including a top-tier leader of the science community as well as the founder of The Weather Channel, have come forward to sue Al Gore for fraud. Al Gore has made massive profits in the promotion of the global warming mythology, and he played a key role in getting the ‘Cap and Trade’ legislation passed. …
“Perhaps this lawsuit will finally give the thousands of ‘dissenting’ scientists a voice again.”

Ten years later, Al Gore needs to finally be exposed for the lies that have made him a very rich man.