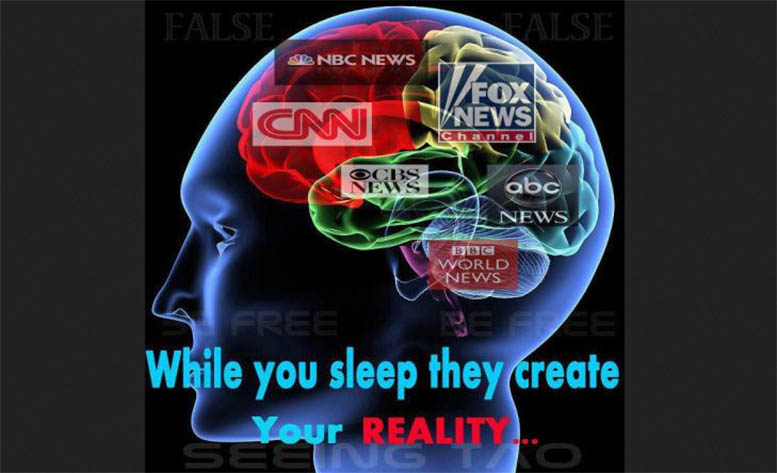 All mainstream television news is built on transitions from one item to another. These transitions are called blends or segues. For example, the anchor in the studio goes to a “reporter on location” where “the news is happening” in real time.

However, in many cases, the anchor in the studio already knows what the reporter on location is going to say. That field reporter could just as easily be sitting in a public bathroom a block away from the studio, for all the good he does. Or he could be sitting in the studio in front of a fake backdrop. It’s a con.

But the sense of transition from one place and person to another imparts the sense of importance. The viewer thinks, “They’re going right to the spot where the shooting occurred an hour ago.” Yes, but the shooting, or whatever actually happened, is over. Or if it’s still in progress, the field reporter is getting his information directly from the police—he could have accomplished that with a phone call from a thousand miles away.

No network news operation allows a reporter in the field to discover something unofficial on his own. That’s verboten. It can get him fired. So if the reporter on location wanted to tell the truth, he would say, “I’m standing here on a street corner five blocks away from the shooting, and I have nothing new to report. The cops just held a press conference, and they merely said the event was under investigation. I could have told you that while I was in bed back in my apartment. That’s it from here at the moment. I’ll be back with more meaningless updates as they occur. Stay tuned.”

Then the anchor back in the studio would say, “Thanks, Craig. I already knew about the press conference where nothing of substance was mentioned. You added zero to that zero. But you’re there. That’s what’s important. You give the illusion of live presence. We’ll be back after this break. Now we have to sell pharmaceuticals you don’t need. Stay tuned.”

Both the anchor and the reporter in the field earn their paychecks by making the viewing audience feel they’re “transitioning” from one important place (the studio) to another (the street corner). That’s the key. Here one minute, there the next. Most of the time, here and there are as vital as someone posting a video of himself sleeping.

“Now we go to Cairo, where street protests are taking place. Our reporter, Jeff Hassenfeffer, is there. Jeff?”

Cut to close-up of people milling about on a street. They’re yelling, shoving, and running. Jeff is standing in front of them. But who are these people? What are they really doing? Why are they there? What’s the issue? Do the protestors understand it? Are they trying to overthrow the government? If so, would it do any good? Would the new government crack down even harder than the old one? Are all these milling people know-nothings? Are they mere fronts for a new dictator in the shadows? The “reporter in the field,” Jeff, doesn’t know and doesn’t care. He’s there. That’s the important thing.

“Thanks, Jeff. Wow. People in the street. A revelation.” Again, the reporter in the field isn’t doing any actual digging to come up with independent information. He’s there because he’s wearing a tan shirt with a lot of pockets, and he has a reasonably nice face, and his voice is a strong baritone. In college, he sang “Fiddler on the Roof.”

There is one thing a field reporter can do. By accident. He can interview a witness to an event who says something that departs from the official scenario. “There were three shooters, not one.” But this momentary flicker is shut down, never to appear again.

When the field reporter shows up at work in the studio the next day, someone will say, “Good interviews. Good job.” But what that means is: “You interviewed people. They said something. Anything.” That’s all.

People have accused CNN of faking on-location footage during the 1991 Gulf War, and later in the coverage of Sandy Hook. Regardless, all the information on the War and the school shooting came from official sources. The field reporters weren’t discovering news—they were taking dictation.

Mainstream network television news is all about building illusions, and the transition from studio to the field is one of the cornerstones. The viewer is treated to a vicarious sense of traveling. In a moment, he goes from New York to Afghanistan. Therefore, something important must be happening.

But it isn’t. That’s the joke. Occasionally, when a breaking story is deemed “super-huge,” the network anchor will go to the scene and set up shop. That’s the pinnacle. He himself, in all his glory, stands on a street corner or a hill overlooking the corner, and says what he would have said back in the studio. Now the audience is riveted. “The man showed up. He’s there. Look. This is big.”

In this case, the trick isn’t location. It’s dislocation. It’s on the order of pulling up to a gas pump, getting out of your car, and suddenly seeing a movie star at the next pump. The star doesn’t belong there. He belongs on a movie screen. But he’s there at the pump. Dislocation.