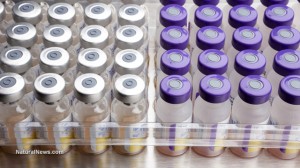 (NaturalNews) Powerful world organizations are coordinating with one another to strip away individual liberty and medical freedom, to force populations into 100 percent vaccine compliance and pharmaceutical dependence, while not giving a damn about the negative outcomes. The World Health Organization (WHO) is putting together a global task force consisting of academic leaders, medical authorities and government officials to psychologically manipulate families into vaccine indoctrination and compliance.

Documents uncovered at the European Regional Office of the World Health Organization unveil a PSYOP operation aimed at training health authorities to use media outlets to persuade entire groups of people to believe in vaccines and obey vaccine mandates. In their PSYOP training manual, Best Practice Guidance 1st Edition: How to Respond to Vocal Vaccine Deniers in Public, WHO seeks to eliminate any discussion of widespread vaccine damage among the public, including vaccine-induced death, the toxicity of vaccine ingredients, the depletion of overall immunity due to compounding vaccination, and the many other reasons why people are waking up and saying no to this generally unnecessary and risky medical intervention.

Instead of discussing the very real and life-altering problems associated with vaccinations, WHO is engaging in psychological warfare that seeks to stereotype vaccine dissenters as “science denialists.” The true “denialists” are these trained vaccine spokespeople, who will not listen to the countless real life stories of vaccine damage, who deny vaccine-induced death and lifelong neurological damage following vaccination.

WHO’s new training manual is so sinister that it attempts to psychoanalyze, categorize and stereotype anyone who asks questions about vaccines, does research, or who prefers to keep filth out of their bodies. Anyone who questions the “experts” or vaccine “science” is stereotyped into one of three categories: a vaccine refuser, a vaccine skeptic or a vaccine denier. In all cases you may be deemed a “conspiracy theorist.” The WHO manual also sees you as an “adversary.”

The WHO’s sinister training manual is a blatant, sociopathic plot to foster subservience to vaccine religion. They are training disciples to preach a sick gospel of pharmaceutical compliance, while blinding people to the real reasons why they continue to be sick (even as they are continuously vaccinated). Compounding vaccine ingredients such as aluminum adjuvant should not be ignored as being “safe” or “sound science.” The discussion should be whether pharmaceutical companies are committing crimes against humanity by putting neurotoxins such as aluminum in vaccines.

The freedom is yours: Think before you vaccinate

This training manual was created to assist government “officials” in persuading the most people to vaccinate, so that they can continue to write laws restricting medical and health freedom. As this vaccination propaganda war ensues, individuals must remember that their bodies belong to themselves, and their children do not have to be subjects of government power abuses and pharmaceutical exploitation. No permission is needed to refuse injections. This freedom does not come through law or even constitutional rights; this freedom is inherent, inalienable and must be defended by the individual with whatever force is necessary. There is no justification to strip individual rights to achieve some fairy tale concept of “herd immunity.” An individual becomes sick as an individual and gets well as an individual.

More people are realizing that the increasing number of vaccines only causes compounding toxicity in their bodies. Instead of continually subjecting themselves and their children to vaccine “science,” they are deciding instead to rely on the natural science of their own bodies and activating their natural defenses using cellular nutrition. People who have experienced vaccine damage or who have witnessed damage to their children have every reason to abstain from future vaccines. If vaccination was all about improving human immunity, then why have proven, nutritional science therapies been ignored by health authorities and written off as “quackery” or “alternative health?”

More and more people are seeing right through the plot of pharmaceutical companies, which is to create lifelong, subservient customers who have no knowledge of their own powerful, inherent immune systems.

More people are abstaining from vaccines and seeking to feed their cells living nutrition, taking control of their futures and standing up against a coordinated manipulative effort that seeks to indoctrinate and control them from birth to death.