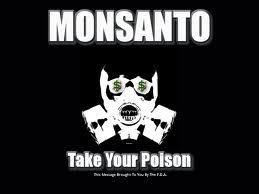 Glyphosate is the main ingredient in Roundup, Monsanto’s product, which is used in hurricane-like proportions on GMO crops.

Robinson doesn’t baldly assert these secret studies prove the poisonous nature of Roundup, but her piece certainly leads to that conclusion.

Here are the facts:

In China, this year, the Ministry of Agriculture admitted that legalizing the import of Roundup was based on a single toxicology test done in St. Louis.

Monsanto then stated, as Robinson reports, “that the study constituted its own commercial secret, adding that the company had never disclosed the study anywhere in the world and did not agree to disclose it now.”

Why not? Because the study proved Roundup was safe? Are you kidding?

In Europe, two studies on Roundup toxicity are also hidden in the closet.

The European Food Safety Authority and German regulators, Robinson states, “have refused… requests to release the studies, on the grounds that they are commercially confidential information.”

In other words, the studies are owned by a corporations.