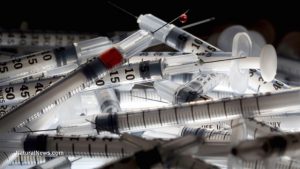 A recent symposium on autoimmune disease that took place in France has brought to the world’s attention a new disorder linked to the aluminum-based chemical adjuvants added to many childhood vaccines. Known as Autoimmune Inflammatory Syndrome Induced by Adjuvants, or ASIA, the novel disease includes a wide range of neurological and immune-associated effects, including chronic fatigue, sleeping disorders, muscle wasting and even early death.

Aluminum has long been recognized as a neurotoxin with a diverse array of metabolic reactions — a 1990 study published in the journal BioFactors, for instance, revealed that even low-level aluminum exposure can cause a host of neurological disorders and related symptoms. But these effects have been largely ignored in the vaccine context, with untold millions of children being injected with this poison every single year.

First identified by an Israeli doctor back in 2011, ASIA has become so widespread that a significant portion of the 9th International Congress on Autoimmunity was devoted to the unveiling of a world registry for those afflicted by it. Most doctors are still unaware of its existence, which means many patients suffering from the effects of ASIA are often bounced around among different specialists until finally being sent to the loony bin.