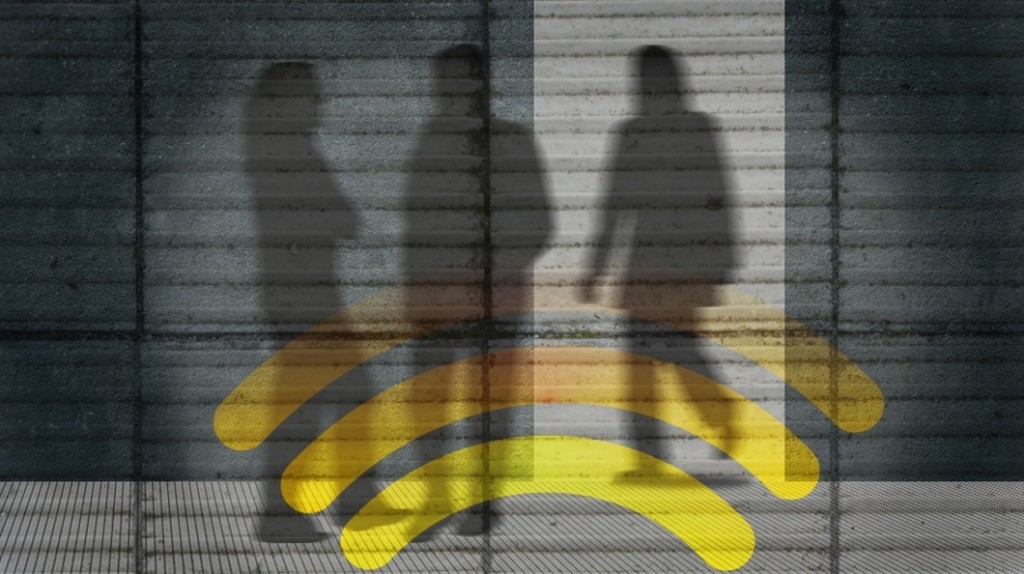 The implications for privacy under a big brother police state are obvious.

Researchers at MIT have come up with a way to use WiFi signals to see behind walls, and map a room in 3-D. By reflecting the signal, it can also locate the movements of people or objects in the room. The Daily Mail reports:

Using a wireless transmitter fitted behind a wall, computer scientists have developed a device that can map a nearby room in 3D while scanning for human bodies.

Using the signals that bounce and reflect off these people, the device creates an accurate silhouette and can even use this silhouette to identify who that person is.

The device is called RF Capture and it was developed by researchers at MIT’s Computer Science and Artificial Intelligence Lab (CSAIL).

The RF Capture device transmits wireless signals that travel through a wall and reflect off a person’s body back to the device.

Since only a small number of body parts reflect the signal back at any given point in time, the device monitors how these reflections vary as someone moves and walks.
Not even your four walls and a roof are to be private if this technology is used for surveillance purposes. And make no mistake, it will be. There are clearly privacy implications to this, but chances are that objections will be kept to a dull roar, with so many other tracking and surveillance activities descending upon society. There are many other related and overlapping technologies, like the radar sweep devices some police are now using to look through walls and locate suspects before going inside. However, the use of WiFi to achieve this make it even easier.

As SHTF previously reported, a new application of WiFi known as Wi-Vi could take surveillance to the next level:

MIT tech geeks have found a way to pinpoint location and track complex movement patterns with far greater accuracy – and what’s more, it can track people’s steps through walls, and the individuals or groups don’t even need to carry a cell phone! MIT professor Dina Katabi and graduate student Fadel Adib:
“Show that Wi-Fi can also extend our senses, enabling us to see moving objects through walls and behind closed doors. In particular, we can use such signals to identify the number of people in a closed room and their relative locations. We can also identify simple gestures made behind a wall, and combine a sequence of gestures to communicate messages to a wireless receiver without carrying any transmitting device. […] It shows how one can track a human by treating the motion of a human body as an antenna array and tracking the resulting RF beam.
The system is interested furthering its control, and fishing for pretexts to cite infractions, collect revenue and play nanny over the lives of the population.

Judging from the comments, many people are at least aware of this. Here are just a few:

BadSull: “The government already has it.”

Greg: “Drones, smart tvs watching you, laptops listening to you, traffic lights tracking your last 10,000 locations and now we look through walls. Gonna have to spend a lot more resources on mental health in the future.”

James Rustles: “So, how do you defeat it to maintain your privacy? That’s the question that needs to be asked.”

James OD: “For a multitude of reasons, it’s starting to seem like a good idea to add a layer of aluminum foil under the drywall when building a house. What’s the world coming to when the disheveled guy living out of the shopping cart under a bridge starts to make sense?”

Technology is changing the tone of reference to tin foil from one of ridicule to one of acknowledgement that these forms of spying are real science, and applicable to the methods used by various agencies and organizations who are investigating, instigating or intimidating.

Many are taking notice of the extreme intrusion the technology represents.

Hanni Fakhoury, an attorney for the Electronic Frontier Foundation said “Your location is something that’s worthy of privacy. We know that, even within your house, where you go can reveal a lot about yourself.”

Is there anywhere left just to be left alone?