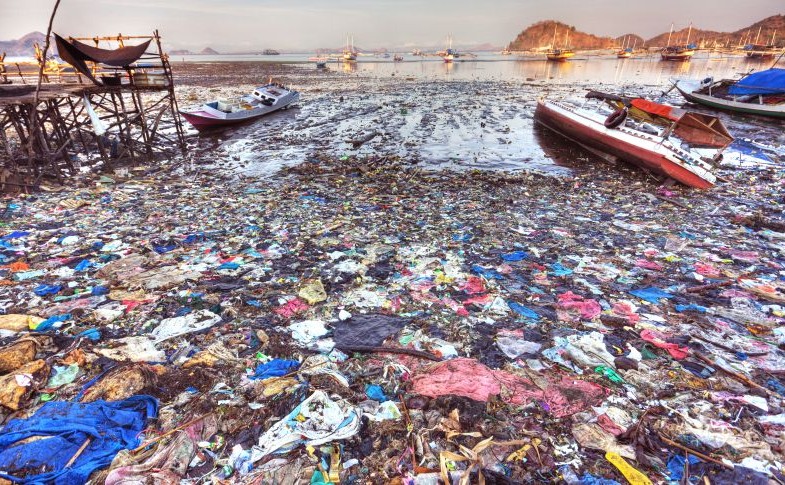 Plastic has infiltrated the ocean’s ecosystem, from plankton to whales.

There are 5.25 trillion pieces of plastic trash in the world’s oceans, and each year, 8 million tons of plastic are added to the count. That’s equivalent to one municipal garbage truck pulling up to the beach and dumping its contents every minute. Though the oceans seem vast enough to stomach a lot of plastic, the level of waste is starting to reach a crisis point: According to a new report by the Ocean Conservancy, in partnership with the McKinsey Center for Business and Environment, by 2025, the ocean could contain one ton of plastic for every three tons of finfish.

All these floating bits of plastic–from micron-sized plastic pieces to those six-pack can rings–not only disrupt marine ecosystems, but they also poison the global supply of seafood. “It’s reaching crisis proportions,” says Andreas Merkl, CEO of the Ocean Conservancy. “Plastic breaks down into small pieces that look like plankton and is eaten by everyone from plankton to whales.” Plastic acts as a pollution sponge in the ocean, so when wildlife ingest pieces, the plastic might as well be a poison pill.

The new report calls for a focus on improving waste management systems in a handful of developing countries that are most responsible for the plastic leakage into the ocean. China, Indonesia, the Philippines, Thailand and Vietnam contribute more than half of the oceans’ plastic since their waste infrastructure hasn’t kept up with rapid industrialization. “We can concentrate on the places where the plastic is hitting the ocean,” Merkl says. “Five countries would solve half the problem.”

On average, only about 40% of waste in these countries is actually picked up for disposal. But it’s not just uncollected waste floating around–though that is three-fourths of the problem. The other quarter of the oceans’ plastic came from post-collection activities. Even when a waste management company picks up waste to landfill it, poorly insulated landfills or illegal dumping mean that trash still ends up in the ocean.