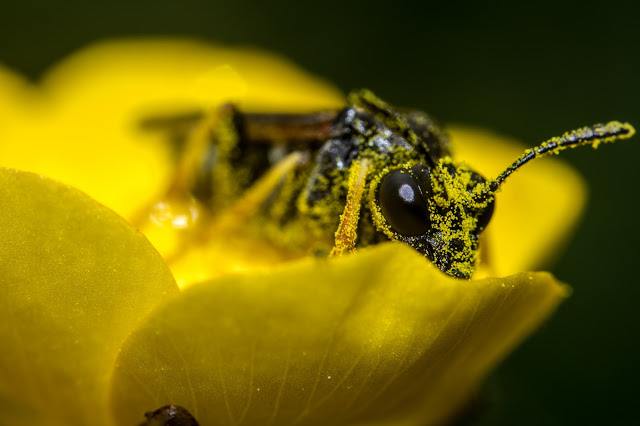 More than 70% of pollen and honey samples collected from foraging bees in Massachusetts contain at least one neonicotinoid, a class of pesticide that has been implicated in Colony Collapse Disorder (CCD), in which adult bees abandon their hives during winter, according to a new study from Harvard T.H. Chan School of Public Health.

The study was published online July 23, 2015 in the Journal of Environmental Chemistry.

“Data from this study clearly demonstrated the ubiquity of neonicotinoids in pollen and honey samples that bees are exposed to during the seasons when they are actively foraging across Massachusetts. Levels of neonicotinoids that we found in this study fall into ranges that could lead to detrimental health effects in bees, including CCD,” said Chensheng (Alex) Lu, associate professor of environmental exposure biology in the Department of Environmental Health at Harvard Chan School and lead author of the study.

Since 2006, there have been significant losses of honey bee colonies. Scientists, policymakers, farmers, and beekeepers are concerned with this problem because bees are prime pollinators of roughly one-third of all crops worldwide.

Previous studies analyzed either stored pollen collected from hives or pollen samplescollected from bees at a single point in time. In this study, the Harvard Chan School researchers looked at pollen samples collected over time—during spring and summer months when bees forage—from the same set of hives across Massachusetts.

Collecting pollen samples in this way enabled the researchers to determine variations in the levels of eight neonicotinoids and to identify high-risk locations or months for neonicotinoid exposure for bees. To do so, the researchers worked with 62 Massachusetts beekeepers who volunteered to collect monthly samples of pollen and honey from foraging bees, from April through August 2013, using pollen traps on the landings of beehives. The beekeepers then sent the samples to the researchers.

The most commonly detected neonicotinoid was imidacloprid, followed by dinotefuran. Particularly high concentrations of neonicotinoids were found in Worcester County in April, in Hampshire County in May, in Suffolk County in July, and in Essex County in June, suggesting that, in these counties, certain months pose significant risks to bees.

The new findings suggest that neonicotinoids are being used throughout Massachusetts. Not only do these pesticides pose a significant risk for the survival ofhoney bees, but they also may pose health risks for people inhaling neonicotinoid-contaminated pollen, Lu said. “The data presented in this study should serve as a basis for public policy that aims to reduce neonicotinoid exposure,” he said.