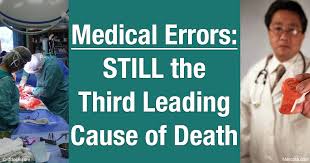 How the Mind Treats “Impossible Things that Couldn’t be Happening”

ONE OUT OF EVERY TEN DEATHS IN AMERICA IS CAUSED BY THE MEDICAL SYSTEM.

When little fragmentary stories about this fact emerge in the mainstream press, they’re one-offs. There is no serious follow-up and no deep investigation. Therefore, the public isn’t aroused.

On May 3, 2016, the Washington Post ran an article detailing deaths from medical errors. This bomb dropped: doctors’ errors account for “about 9.5 percent of all deaths annually in the United States.”

Let that sink in.

Roughly one out of every 10 deaths in the US is caused by medical errors. (Under “errors,” you can include a wide range of toxic treatment.)

No major newspaper or news network pounds on this factoid day after day. It’s here and then it’s gone. It’s on the level of: “The last seven presidents have been assassinated. And now, here’s the weather.”

Something else is going on, too. I’ll lay it out for you.

Most of the general public, and many reporters, can’t even begin to absorb that medical-death statistic. It bounces off them. They either reject it out of hand, misread it, or fail to transport it to the part of their mind where they think about things.                          The statistic is virtually invisible to them.

“Let’s see, 10% of all deaths in America are caused by the medical system. REJECTED.” I even had one person tell me ten percent “wasn’t very much.” I’ve had people change the subject rapidly when I presented them with the statistic.

So it isn’t just major media. People are running their own fake news operation on themselves.

This has been called “cognitive dissonance” or some other fancy name. It’s just the “bounce phenomenon.” A fact bounces off a person. It has no effect.

I’ve dealt with this for more than 30 years as a reporter. I’m in the business of presenting “bounce-able” facts. I’ve seen the full array of reactions, time and time again.

ONE OUT OF EVERY TEN DEATHS IN AMERICA IS CAUSED BY THE MEDICAL SYSTEM. Bounce, bounce, bounce.

Here is another process that goes on in the mind. It starts this way: WELL, IF THAT WERE TRUE, THEN… The person starts to think about the boggling fact. He starts to flesh out the implications. And he stops. Because the implications are too much. His mental processes and his basic orientation aren’t flexible enough to deal with them.

Of course, I’ve mentioned medically caused death to doctors. Their comments go something like this: “That couldn’t be true.” “That was just one study.”

TEN PERCENT OF ALL DEATHS IN AMERICA ARE CAUSED BY THE MEDICAL SYSTEM.

Response; “Wow. That would make it the third leading cause of death. That means the more people who are in the system, the more deaths. The public has to know about this…”

No bounce. Ah, now we’re on to something.