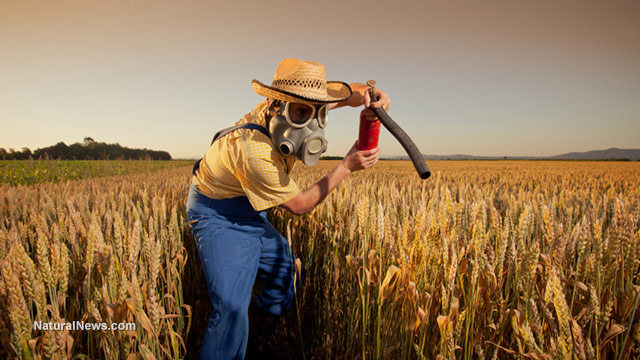 As reported on Natural News by David Gutierrez in October of 2014: “A field of unregulated genetically modified (GM) wheat has been discovered growing wild in Montana, the U.S. Department of Agriculture (USDA) has announced. No varieties of GM wheat have been approved for cultivation in the United States, but this is the second plot discovered growing on its own in less than a year and a half.”

Do you think those two plots of genetically modified wheat are the only two out there? When wheat carries the traits of “herbicide resistance,” that means more and more herbicide will have to be sprayed as the weeds become resistant too. Agrochemical giant Monsanto is at it again, developing GM herbicide-resistant wheat. This time around, the wheat will be resistant to THREE different chemical herbicides: glyphosate, glufosinate and dicamba. Back in 2013, an Oregon farmer found Monsanto’s original “Roundup Ready” wheat growing in his fields. Monsanto had claimed to stop developing that line altogether about 10 years ago, but they obviously lied. It’s like the Cold War with these corporations — they agree not to do something and then they go double down and work harder on it. Monsanto had actually RESTARTED extensive field trials in 2011. Of course, the USDA called it an isolated incident and just couldn’t figure out how it could have happened in an Oregon field. Sure.

Every farmer in America who doesn’t pollute his/her crop with chemicals and who doesn’t buy seeds that contain chemicals (GMO) deserves a subsidy bonus check from their country and a “do it yourself” lab kit that allows them to test their fields and crops for GMO contamination. If the FDA and USDA weren’t so darned crooked and corrupt, we would be living this way. In 2012 alone, the US exported wheat at a value estimated over $18 billion. How much of that wheat was genetically modified and got through as otherwise?

Over 60 countries have bans on GM crops. After the Oregon GM wheat discovery, Japan and the entire EU enacted serious barriers and restrictions on their import of wheat. Farmers immediately launched lawsuits against Monsanto, but Monsanto has previous “members” serving as high as Supreme Court Justices, so that could end ugly, but Monsanto still settled in the millions, most likely to keep the whole topic hush hush so the American masses won’t panic and stop buying all that INFLAMMATORY WHEAT.

You can’t wash off GMO

Roundup Ready farming is failing. That is why Monsanto is making new herbicide-tolerance GM crops — to fight back against the superweeds and superbugs these chemicals themselves created. But Mother Nature is evolving faster, just as it is with antibiotic-resistant bacteria. The new GMO will be more of the same nightmare, but even more superweeds and superbugs to overcome, that are smarter and stronger anything mankind can “concoct” in a laboratory.