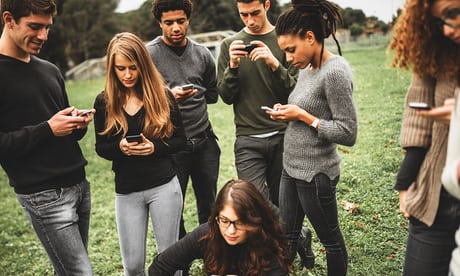 Google, Twitter and Facebook workers who helped make technology so addictive are disconnecting themselves from the internet. Paul Lewis reports on the Silicon Valley refuseniks alarmed by a race for human attention.

Lewis compares Snapchat to heroin and he was particularly aware of the allure of Facebook “likes”, which he describes as “bright dings of pseudo-pleasure” that can be as hollow as they are seductive. And Rosenstein should know: he was the Facebook engineer who created the “like” button in the first place.

Of most concern is the psychological effects on people who, research shows, touch, swipe or tap their phone 2,617 times a day.

There is growing concern that as well as addicting users, technology is contributing toward so-called “continuous partial attention”, severely limiting people’s ability to focus, and possibly lowering IQ. One recent study showed that the mere presence of smartphones damages cognitive capacity – even when the device is turned off. “Everyone is distracted,” Rosenstein says. “All of the time.”