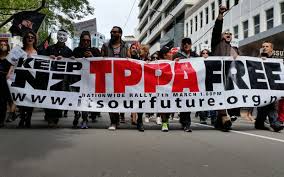 By – It’s our future – Kiwis against TPPA

Trade Ministers from the 12 countries in the Trans-Pacific Partnership Agreement (TPPA) will sign the TPPA in Auckland on Thursday 4th February, according to statements by governments of Chile and Peru (although this has still not been confirmed by the secrecy-obsessed New Zealand government).
Today, the network of Kiwis against the TPPA, It’s Our Future, has launched a petition, together with partners, ActionStation and ShoutOut. The petition will gather the signatures of Kiwis who do not consent to the government signing the TPPA.

The petition is hosted by ActionStation: http://www.actionstation.org.nz/dontsign