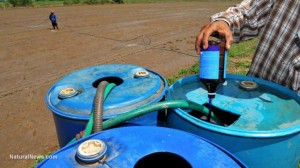 (Natural News) As glyphosate is increasingly scrutinized due to its carcinogenic effects, Monsanto has quietly invested more than $1 billion in a new (and more toxic) herbicide called dicamba. The chemical is used in conjunction with other herbicides, including glyphosate, to kill broad-leafed weeds.

One of its biggest disadvantages is that compared to glyphosate, dicamba is “much more ‘volatile,’ meaning it easily becomes airborne and drifts away from where it is applied,” according to Modern Farmer.

“Historically, dicamba has been used in agriculture primarily as a pre-emergent (applied to the soil to kill weed seeds prior to planting a crop), since it could not be applied directly to crop plants.

“But this spring farmers began planting Monsanto’s new soybeans on about 1 million acres in the US, and have been spraying their fields with dicamba (to kill an especially pernicious strain of glyphosate-resistant pigweed)—which then drifts on the wind, damaging soybeans on other farmers’ fields that are not resistant to the herbicide.”

Dicamba is more toxic than glyphosate, a probable human carcinogen

Dicamba works by imitating the natural hormones in plants, causing them to grow abnormally and eventually to die. The chemical is sold under several trade names including Banvel, Diablo, Oracle and Vanquish.

Crops resistant to dicamba are supposed to be sprayed with a new version of the chemical that’s less prone to vaporization and therefore less likely to drift onto nearby farmland. But the pesticide cocktail remains illegal, as it has not yet been approved by the U.S. Environmental Protection Agency.

Because the new concoction is expected to be approved next year, Monsanto decided to go ahead and start selling the dicamba-resistant seeds to farmers, promising higher yields, as well as other benefits.

The needless destruction of America’s farmland

“Supposedly, Monsanto instructed farmers not to spray the new soybeans with dicamba, but apparently the temptation was too great: An estimated 200,000 acres of soybeans in Arkansas, Tennessee, and Missouri have been affected by dicamba drift so far this summer,” Modern Farmer notes.

Farmers from those regions have filed more than 100 complaints about drifting dicamba destroying their crops.

The perpetrators have reportedly been fined up to $1,000, which some say is a slap on the wrist considering the damage it’s causing to America’s food crops. Some farmers have lost up to 30 percent of their yields due to drifting dicamba.

If dicamba continues to be sprayed, it will likely lead to more superweeds and more pesticide pollution. An estimated 15 million acres of dicamba-resistant seeds are expected to be planted in the United States next year.

An estimated 5.6 million pounds of dicamba are applied on U.S. farmland each year, with the majority of it sprayed on corn in Iowa, Minnesota, South Dakota and Indiana. The herbicide is also used on wheat, and as a chemical for landscaping.

“Acute exposure to dicamba causes skin irritation and some skin sensitization in laboratory tests, as well as severe eye irritation. The eye damage can be irreversible,” according to the Pesticide Action Network.

Dicamba poses adverse effects to reproduction in animals, as well. Rabbits exposed to low doses of the chemical suffered fetus losses, while mallard eggs exposed to the herbicide experienced reduced and stunted growth of the embryos and malformations of the eyes.