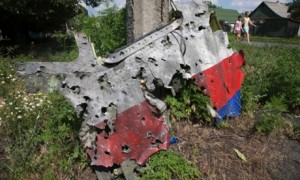 A Thursday article in the New Straits Times, Malaysia’s flagship English-language newspaper, charged the US- and European-backed Ukrainian regime in Kiev with shooting down Malaysian Airlines flight MH 17 in east Ukraine last month. Given the tightly controlled character of the Malaysian media, it appears that the accusation that Kiev shot down MH17 has the imprimatur of the Malaysian state.

The US and European media have buried this remarkable report, which refutes the wave of allegations planted by the CIA in international media claiming that Russian president Vladimir Putin was responsible for the destruction of MH17, without presenting any evidence to back up this charge.

The New Straits Times article, titled “US analysts conclude MH17 downed by aircraft,” lays out evidence that Ukrainian fighter aircraft attacked the jetliner with first a missile, then with bursts of 30-millimeter machine gun fire from both sides of MH17. The Russian army has already presented detailed radar and satellite data showing a Ukrainian Sukhoi-25 fighter jet tailing MH17 shortly before the jetliner crashed. The Kiev regime denied that its fighters were airborne in the area, however.

The New Straits Times article began, “Intelligence analysts in the United States have already concluded that Malaysia flight MH17 was shot down by an air-to-air missile, and that the Ukrainian government had had something to do with it. This corroborates an emerging theory postulated by local investigators that the Boeing 777-200 was crippled by an air-to-air missile and finished off with cannon fire from a jet that had been shadowing it as it plummeted to earth.”

It cited “experts who had said that the photographs of the blast fragmentation patterns on the fuselage of the airliner showed two distinct shapes—the shredding pattern associated with a warhead packed with ‘flechettes,’ and the more uniform, round-type penetration holes consistent with that of cannon rounds.”

The New Straits Times cited several sources to substantiate its position. One was testimony by a Canadian-Ukrainian monitor for the Organization for Security and Cooperation in Europe (OSCE), Michael Bociurkiw—one of the first investigators to arrive at the crash site. Speaking to the Canadian Broadcasting Corporation on July 29, Bociurkiw said: “There have been two or three pieces of fuselage that have been really pockmarked with what almost looks like machine gun fire; very, very strong machine gun fire.”