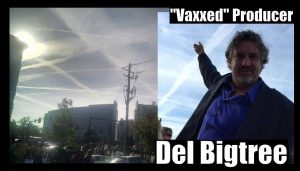 A protest at the CDC building in Atlanta, Georgia, with the “Vaxxed” documentary producer and crew in attendance was decimated by chemtrails this weekend.

Some reported respiratory symptoms, illness, and tiredness, something that is frequently reported after heavy exposure to spraying, which we documented earlier this year at Era of Wisdom in “The Geoengineering Escalation of 2016.”

Watch this video: Era of Wisdom