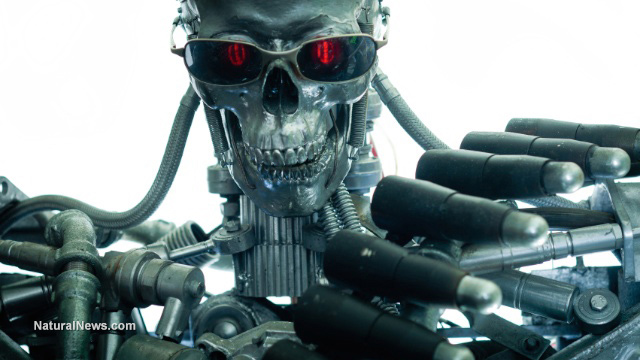 (NaturalNews) Google’s android “Terminator” army is nearly ready for its assault on the human race. With tech pioneer Elon Musk (and physicist Stephen Hawking) urgently warning that artificial intelligence (AI) could destroy humanity, Google seems intent on building the android Terminator hardware that AI systems will inhabit. The result, warn an increasing number of experts, could spell the end of humanity and a literal “rise of the robots” as often depicted in sci-fi.

See Stephen Hawking and Elon Musk sign open letter warning of a robot uprising from the Daily Mail. Also read Elon Musk Is Not Alone In His Belief That Robots Will Eventually Want To Kill Us All from Business Insider.

A video compilation by Discovery HD Channel called real life Terminator robots depicts the evolution of creepy human robots and their abilities to throw heavy objects, sneak through the forest, leap onto the roofs of tall buildings, traverse complex terrain and perform combat-optimized movements such as kneeling (to fire a rifle) or doing pushups.

One of the creepiest robots in the video is a mule-sized cargo carrying robot that can pick up heavy cinder blocks with its articulating “arm” and throw them with extreme force against would-be targets. This is the same robot that was previously shown in Boston Dynamics videos playing “track the human” games where it would stalk a person through the forest. Google acquired Boston Dynamics and seven other robotics companies in late 2013.