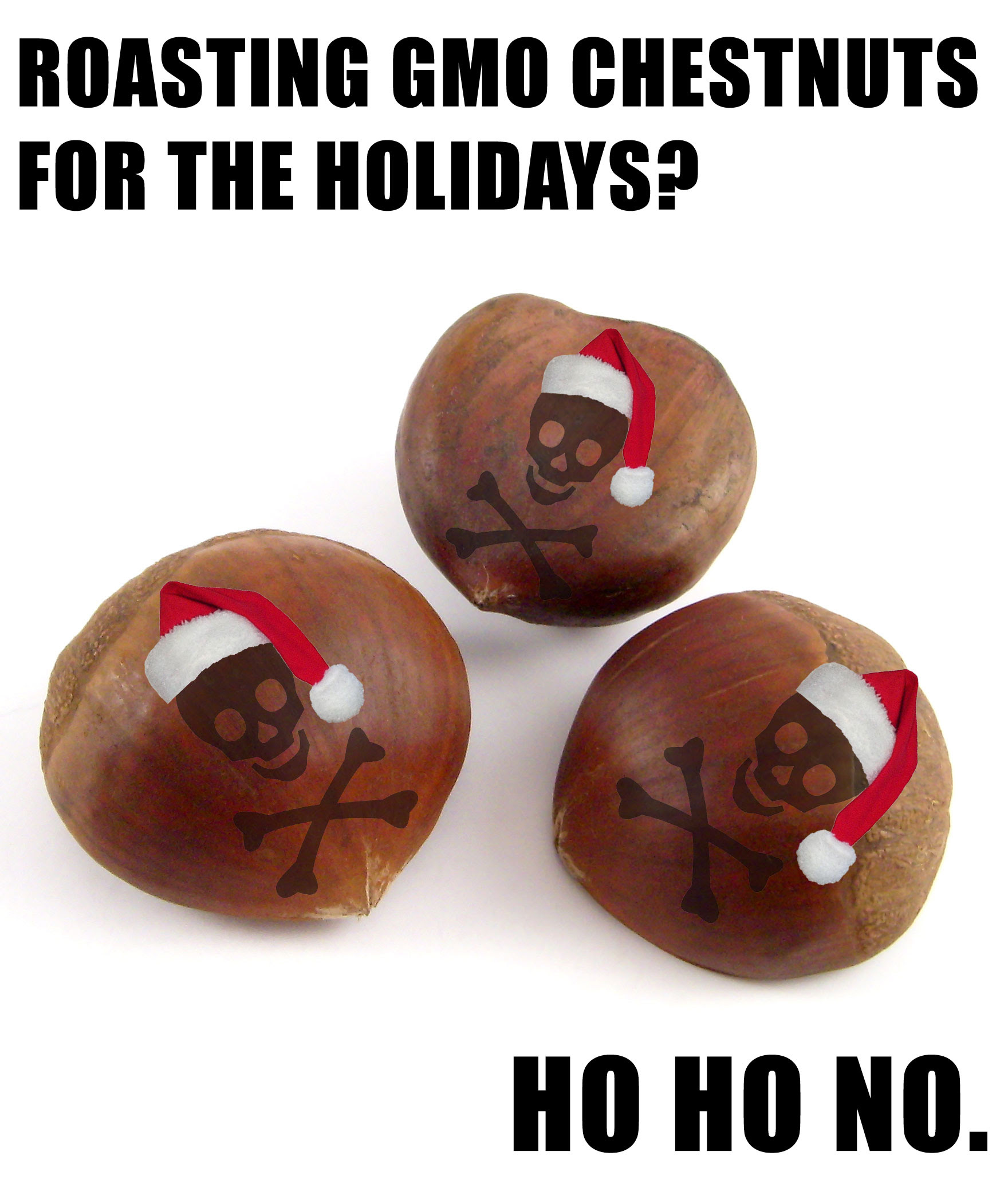 In the midst of the holiday season, while thoughts turn to roasting chestnuts, a handful of scientists are working to genetically engineer the iconic American chestnut tree which they hope to release throughout the Appalachians and the Eastern United States. Indigenous Peoples, scientists and others are raising alarms about the risks of these trees, cautioning about their dangerous impacts to forests, wildlife and human health [1]. Due to these unassessed risks, they warn, GE chestnuts, or any GE trees trees should never be approved for planting.

But GE tree scientists appear less worried about risks than about public relations. In his most recent annual report [2], Dr. William Powell of SUNY’s School of Environmental Science and Forestry stresses that it is “essential to reach out to the public,” adding, “we need their help to get the chestnut through the regulatory process. There is a significant anti-GMO movement that may try to stop the deregulation (legalization) of the [chestnut]. Therefore we need strong public support to counter any roadblock they may try to erect.”

“First of all, the GE tree regulatory process is not supposed to be a popularity contest,” stated BJ McManama of the Indigenous Environmental Network. “Opposition to GE trees is growing because people are concerned with defending and protecting the biodiversity of our already stressed forest ecosystems. If GE American chestnuts are legalized, the ripple effects will be far reaching and potentially catastrophic. Even with years of research, all the variables cannot be identified and/or tested, which is precisely the reason to reject all GE trees once and for all.”

And if it’s widespread public opposition he is worried about, Powell has good reason to be concerned.

“In 2015 alone, more than a quarter of a million people signed on to reject genetically engineered trees [3],” stated Anne Petermann, Executive Director of Global Justice Ecology Project and Coordinator of the international Campaign to STOP Genetically Engineered Trees. “Just this year, protests took place on six continents [4], and in September, there was an action at the world headquarters of GE tree leader ArborGen where two of us were arrested [5]. Earlier this month, in the face of a possible jury trial, they dropped our charges.”

In 2013 the largest ever protests against GE trees took place in Asheville, NC at the Tree Biotechnology 2013 conference. Hundreds of concerned citizens rallied there against GE trees, and several were arrested for disrupting the conference.

“Right now, the US biotechnology regulatory process is being reviewed [6],” added Dr. Rachel Smolker of Biofuelwatch. “The government appears to be trying to streamline the approval process for the large number of new GE plants, trees and microbes that are coming up for evaluation. Yes, it’s true the current regulatory process is basically obsolete, but any new process should be more rigorous, not less. The GE American chestnut is a perfect example of this. If this tree were greenlighted, the impacts to forests, biodiversity and people would be nearly impossible to predict and potentially devastating. It would also open the door to other dangerous GE trees. If the regulatory process was really science-based and concerned about safety, Powell’s GE chestnuts would never be approved. In fact, there would be a permanent halt on any GE tree deregulation,” Smolker said.

Biofuelwatch, Global Justice Ecology Project and Indigenous Environmental Network are part of a national committee that includes scientists, lawyers, Indigenous Peoples, farmers, GE tree experts, activists and others committed to preventing the large-scale release of all genetically engineered trees into the environment. See nogetrees.org and stopgetrees.org.