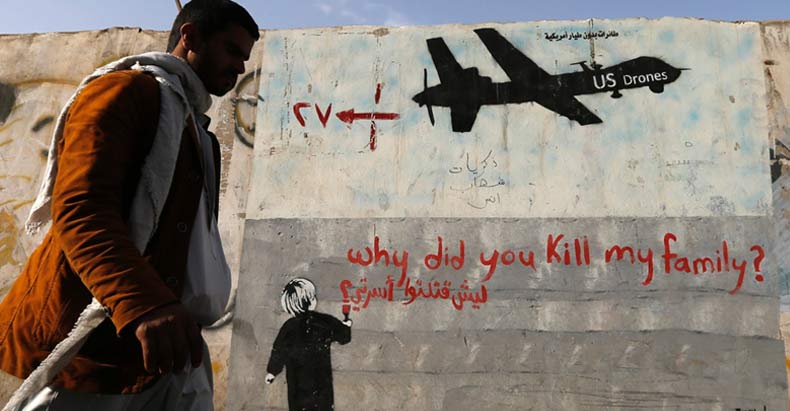 Three former Air Force airmen spoke out against the USA’s military drone program in a damning NBC special last week. The men, who have over 20 years’ experience between them, claim the use of drones is “one of the most devastating driving forces for terrorism and destabilization around the world,” and branded them “morally outrageous.”

“People think it’s a video game. But when you fire that missile, there’s no re-start,” says former sensor operator Stephen Lewis, who was active in the Drone Program between 2005 and 2010.

Stephen was so affected by his role in the program that he drank himself to sleep, every single night. His colleagues did the same, saying:

It was the culture there. After every shift, you’d consume a lot of alcohol…to take the edge off, so you didn’t have to think about what you did.

Michael Haas was a technician and instructor between 2005 and 2011. “These drones are very, very good at killing people,” he says. “We were very callous about any collateral damage.” Haas reveals they would often kill people simply because they were associated with a guilty person, and “we didn’t consider other people on-screen.” He also spoke frankly about the de-humanization of targets:

The less they can get you to think of the thing you’re shooting at as human, the easier it becomes for you to just follow through.

Haas reveals the use of code phrases that detract from the real cost of the Drone Program: ‘Cutting the grass before it gets too long,’ for example, is a euphemism for killing people before they become a problem – and the sickening part is, even children are not exempt from this philosophy.

Cian Westmoreland, a technician who served the program between 2006 and 2010, seems mentally and emotionally wiped out in this interview. He says the program is “politically expedient in the short-term” and like the other men, he’s eaten up with guilt about what he did.

I started having nightmares about kids and mothers dying, and I’m trying to help them, but I couldn’t. I just feel helpless, I knew it was my fault.

Cian, visibly upset, feels cheated by his country. “People who join the military…we join because of things we learned in school,” he says. “We learn about our Government, and the great things [the USA] was founded on.” Cian reveals he voted for Obama, who stood for change and human rights, but now he regrets supporting the President.

We learn about our Constitution, and we learn that Americans are always afforded due process. They haven’t honored the Constitution. They should be fighting for that more than anything.

Another former drone pilot has spoken of his shame at personally killing over 1600 people. These heartbreaking testimonies come as the Pentagon plans to increase drone strikes worldwide by over 50% in the coming years. However, official research suggests the US-led coalition’s foreign policy will never stop terrorism: it simply fuels more hatred towards the West and encourages the radicalization of young Muslim men.