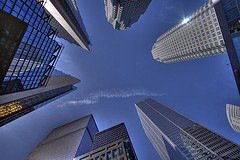 Five major international banks are expected to plead guilty as soon as next week to criminal charges in the US related to their deliberate manipulation of global foreign exchange markets, which allowed them to rake in billions of dollars at the expense of retirees, university endowments and municipalities.

Citigroup, JPMorgan Chase, Royal Bank of Scotland Group, Barclays and UBS are expected to plead guilty to felony fraud and antitrust charges. They will pay fines totaling several billions of dollars, according to bank and regulatory officials who spoke anonymously with the New York Times, Bloomberg and Reuters.

The effect of the guilty pleas will be essentially zero, beyond the immediate costs of the fines levied on the institutions. As the Times put it, “life will go on, probably without much of a hiccup.”

In the years since the financial crisis, federal regulators avoided bringing criminal charges against banks and their executives, opting instead for either cash settlements and so-called deferred-prosecution agreements, in which charges are delayed on the basis of the banks’ compliance with certain conditions.

In 2012, it became clear that major global banks, including UBS and Barclays, were systematically engaged in manipulating LIBOR (London Interbank Offered Rate), the benchmark global interest rate on the basis of which hundreds of trillions of dollars of financial contracts are valued.

In June of that year, Barclays was fined $200 million by the Commodity Futures Trading Commission and $160 million by the United States Department of Justice. This was followed by UBS’s agreement in December 2012 to pay regulators $1.5 billion in connection with the scandal and an agreement by Deutsche Bank in 2015 to pay $2.5 billion to regulators. Numerous other banks, including Citigroup and JPMorgan, were fined by European authorities.

UBS was offered a deferred-prosecution agreement in connection with the LIBOR scandal, but broke the terms of the agreement by manipulating the $5.3 trillion-a-day foreign exchange markets in the subsequent periods.