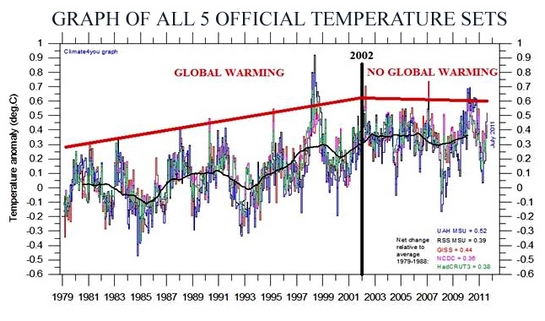 Washington Post op-ed writer Richard Cohen was last week caught lying while bad mouthing Texas governor, Rick Perry’s presidential candidacy. Cohen, who would have his readers believe humans are dangerously warming the planet, jumped the shark to attack skeptic Perry over his stance on the man-made global warming issue (AGW). Cohen spouted the kooky claim that skeptic scientists “could hold their annual meeting in a phone booth, if there are any left.“

Sadly for Cohen the facts below prove he is just another mendacious mainstream propagandist of climate alarmism.

For instance, the shocking truth is that all 5 official data sets show global cooling since 2002 while a third of all stations sustain a long term cooling trend for their entire history.

Indeed, so infuriated over the blatant lies is Nobel Prize winning physicist, Dr. Ivar Giaever, that last week he resigned in disgust from the American Physics Society for their part in sustaining the now utterly debunked AGW propaganda.