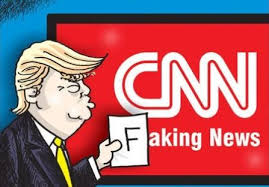 True enough. And it appears that in addition to news and TV news, there is now a third category — CNN news. Or, as the president would say, “Very Fake News.”

Could they sink any lower? And now, after being busted on one bogus story after another these last few months, a senior producer has been caught on tape admitting that the whole “Russian collusion” story is, as he put it, “BS … a witch hunt.”

The producer, John Bonifield, bragged, “The ratings are incredible.”

Which CNN reinforced yesterday by tweeting back at the president, “CNN just posted it’s (sic) most watched second quarter in history.”

Uh, up to a point, as Joe Concha of thehill.com told me yesterday.

“They’re up, but they’re still a very distant third in a three-way race. It’s Russia-Russia-Russia but they still can’t get a million viewers in prime time. Their ratings are right there in Megyn Kelly territory.”

The web outfit that recorded the unfortunate CNN producer calls his employer “American Pravda” — which is really not fair to Pravda. Pravda never had a run of fake news like CNN. How do you know when CNN is running fake news? By the number of bylines.

Take the most recent retracted Russian collusion story, shot down by a Russkie outlet called Sputnik News. (You can’t make this stuff up, unless of course you’re CNN.) They fired the three pipe artists who concocted it — one source, three “reporters.”

That fake news about how ex-FBI director James Comey was going to “refute” Trump on the issue of being told three different times he was not under investigation. Three reporters to come up with another completely fake story.

As the slogan says, This is CNN.