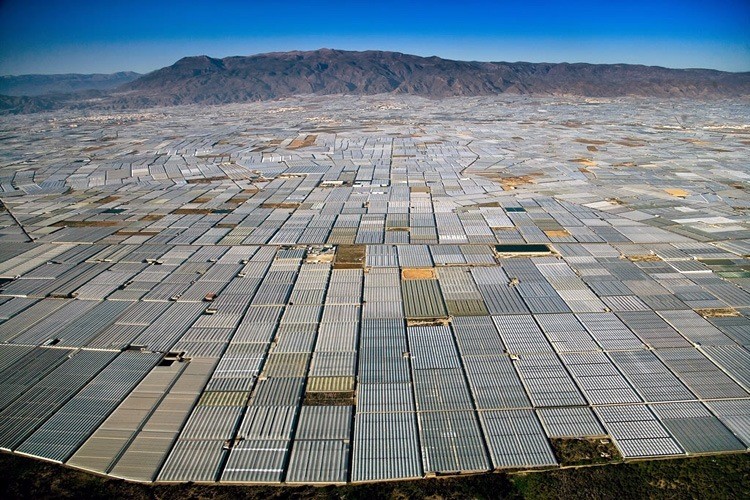 Greenhouses cover every square inch of land, more than 165 square miles of land around Almeria, Spain.

The smell of plastic and chemicals permeate the air and offer the first scent of the larger environmental problem.

The greenhouses are almost all hydroponic—growing vegetables in water, air and a chemical stew of fertilizer, herbicide and pesticide. Due to the hot and extremely difficult working conditions inside the greenhouses, almost all of the human labor is imported, much of it slave-like from Africa.

In a 2011 news report in The Guardian it said that more than 100,000 workers toil away inside the greenhouses, many living in “inhuman” slums and laboring in the chemical stew.

A 2015 report in NaturPhilosophie noted that, in addition to the massive human rights problems, the area is plagued with depleted aquifers, the largest desalination plant in Europe to keep water flowing into the greenhouses, and rising cancer rates due to pesticide exposure among workers.

Waste from the “farms” is reported to run off into the Mediterranean Sea, including the chemical waste, plastic waste and human waste of the workers. Entire industries have popped up in the area simply to make the massive amount of plastic for the greenhouses which has a short lifespan and is sometimes discarded, strewn across the landscape or washed into the sea.