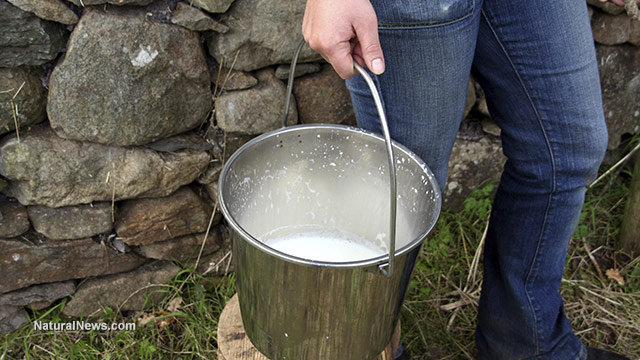 (NaturalNews) The U.S. Food and Drug Administration (FDA) claims that it’s basically a death sentence for you and your children. But raw milk consumption, according to a new study published in The Journal of Allergy and Clinical Immunology, can actually help prevent colds, viruses and respiratory tract infections (RTIs) from forming in kids, as opposed to commercially processed milk which provides little or no health benefits.

A cohort of researchers, doctors and other medical professionals from across Europe investigated the effects of raw milk versus boiled farm-fresh milk and commercial processed milk as part of a larger investigatory project known as “PASTURE.” A group of women, roughly half of whom lived and worked on livestock farms in rural areas of mostly central Europe, were recruited to participate in the research.

All of the women were in their third trimesters of pregnancy at the time of the study, and detailed consumption and lifestyle patterns, including milk-drinking habits, were carefully evaluated and compared. In total, 983 children were included in the final data set, which revealed that milk in its pure, raw, unobstructed form is superior in terms of immune-boosting nutrition.

According to the research, raw milk works a lot like breast milk in providing protective, anti-infective health benefits to children. Compared to highly processed commercial milk, raw milk was found to help lower C-reactive protein levels, which are directly associated with inflammation. Raw milk, in other words, works against inflammation, while processed milk may help promote it due to its altered proteins.

“The main finding of this analysis was an inverse association between consumption of unprocessed cow’s milk and rhinitis [cold or runny nose], RTI [respiratory tract infections], and otitis [ear infection],” wrote the authors. “The effect was strongest when cow’s milk was consumed raw; boiled farm milk exhibited an attenuated effect.”

Does ultra-heat-treated commercial milk promote respiratory and other health problems?

Conversely, consumption of ultra-heat-treated commercial milk, the most widely available milk product on the market, was not found to decrease levels of C-reactive protein, which appear to be a leading cause of disease. With fevers specifically, commercial milk was found to actually increase their prevalence compared to raw milk.

Raw milk, on the other hand, is associated with a roughly 30 percent decrease in respiratory infections and fever, and could help babies and young children overcome these common ailments. Even minimally processed milk boiled directly on the farms was found to be beneficial, though much less so than true raw milk.

“[W]e are now not talking about asthma and allergies, but fever and infections in young children,” stated Dr. Ton Baars, a professor and senior scientist for milk quality and animal welfare at the Research Institute of Organic Agriculture in Germany, and one of the lead authors of the study. “It means there is additional new evidence that raw milk is a protective agent in infectious diseases in young children.”

Unlike in the U.S. where irrational superstition and paranoia have landed raw milk in the “dangerous” category, Europe is already widely accepting of raw milk, and increasingly so. In many countries, raw milk vending machines are prevalent on busy city streets, providing quick and easy access to fresh milk from local farms.

“In Europe, the consumption of unpasteurized milk has repeatedly correlated with protection against allergic disease,” wrote Moises Velasquez-Manoff in a piece for The New York Times late last year.

“In America, 80 percent of the Amish studied by Dr. [Mark] Holbreich consume raw milk. In a study published earlier this year, Dr. [Bianca] Schaub’s group showed that European children who consumed farm milk had more of those regulatory T-cells, irrespective of whether they lived on farms. The higher the quantity of those cells, the less likely these children were to be given diagnoses of asthma.”