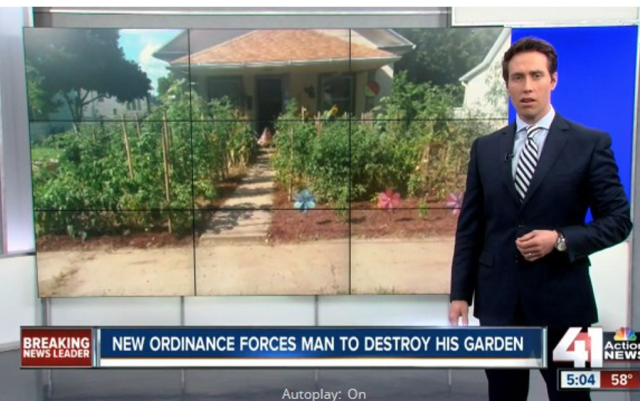 The new city requirement details that vegetation must be kept 30 feet from the curb, preventing local resident Nathan Athans from having a garden in his front lawn.

When asked by the American Intelligence Report if he was invited to any city meetings discussing possible regulation changes effecting his property, he responded “no.”

Athans backyard only gets 2 hours of sunlight, preventing various vegetables from growing so he chose to plant one in his front yard, putting a large target on his property by the city.

He loves tending to his garden and is very fond of it.’“I’d probably say about 300 hours [so far this year], I spend all my free time out here,” Athans told KSHB. “I want my family to know where their food is coming from, I don’t want to have to go to the grocery store and worry about what was done to that food.”

Athans claims there was a “witch hunt,” by neighbors and city officials over his choice to put the garden in the front yard. Last
year the city fined Nathan for having weeds in his garden. He complied and paid the ticket. “We did it, completely weed-free, we paid our citation,” he said.

City official, Paul Loving, believes differently about the garden. “I don’t know that there would have been a problem with them had the gardens been well kept, they weren’t.” Loving told KSHB, that the city received many complaints and the ordinance is the resolution. “Because I want my yard a certain way doesn’t mean the neighborhood has to keep his yard the same way, but I do have an expectation that we’ll all be reasonable in what we put in our front yards.”

The family initiated an on-line petition hoping to sway the city to change the ordinance.