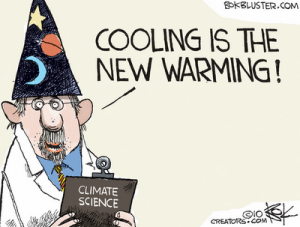 The Global Warming establishment is NOT a business. All the tentacles that suck up public money to finance crony collectivism are based upon government subsidies and artificially higher consumer prices. The absurd lunacy that economic growth and productive jobs can be created with the underlying premise of the “so called” industrial model is based upon lies, deceit and cooked data; clearly demonstrates the disingenuous nature of the zealots that benefit from the fraud.

Dishonest scientists living off government grants, career bureaucrats counting the days till retirement, greedy politicians begging for campaign donations and pathetic media lap dogs eager to continue the lies, all are responsible for the prevarication campaign behind the religion of the global warming cult.

As for the business con artists who bilk their deceived investors with pie in the sky business plans, as they fabricate their financial statement to raise money for schemes that can never be profitable – they all belong in jail.

Finally the Banksters, financial firms, hedge funds and now the yieldcos that push this idiocy, the wrath of all humanity will be your reward. Cap and trade is no formula for prosperity.

Now the stakes have changed and the debate shifts as righteous outrage is about to erupt. Christopher Booker cites numerous instances to back up his assertion in the essay, The fiddling with temperature data is the biggest science scandal ever.

“When future generations look back on the global-warming scare of the past 30 years, nothing will shock them more than the extent to which the official temperature records – on which the entire panic ultimately rested – were systematically “adjusted” to show the Earth as having warmed much more than the actual data justified.

Of much more serious significance, however, is the way this wholesale manipulation of the official temperature record – for reasons GHCN and Giss have never plausibly explained – has become the real elephant in the room of the greatest and most costly scare the world has known. This really does begin to look like one of the greatest scientific scandals of all time.”

Further stats challenge the deceitful doctrine that drives the Global Warming money making machine. However, the “True Believers” will never accept any data that conflicts with their beliefs. Hottest year ever? Skeptics question revisions to climate data is just one more problem for them to ignore.

John Casey spills the beans in Scientist Confesses: “Global Warming a $22 Billion Scam”. “He found evidence — buried right in the government’s own environmental studies — that destroys their argument for “global warming.” Using their own data, John has proven, once and for all, “global warming” is a sham. A sham that our government spends $22 billion a year financing.”

Fact: We Haven’t Seen Any ‘Global Warming’ for 17 Years!

Lie No. 2: The Oceans Are Getting Warmer

Fact: The North Polar Ice Cap Is Increasing in Size!

Shame on Them, Because That 97% Figure Is Completely Fabricated.

Fact: There Has Always Been, And Always Will Be Climate Change.

It comes as no surprise that the extreme environmental establishment wants to keep the public in the dark as they Banned ‘White Paper’ Proves Global Warming Is a Dirty Scam.

The full list of those who have profited from the gambit of global warming is shocking . . . Al Gore, President Barack Obama, General Electric . . .

Folks, this hyped up fraud is all about the Benjamin’s. That is the money side of the equation that keeps the political game going to achieve the systematic de-industrialization of the domestic economy to push the poverty level to the heights that would make any dedicated global warming fraudster proud.

A valuable insight into the cast of players is provided by Norman Rogers in the essay, Inside the Global Warming Skeptics Conference.

“The global warming establishment consists of politicians, environmental organizations, scientists and scientific societies, as well as the manufacturers of such things as corn ethanol, wind turbines, and solar power stations. The global warming establishment is showered with money in the form of government subsidies and government regulations that force consumers to subsidize the establishment. Calculating the total amount of money flowing to the global warming establishment is a difficult accounting challenge. A report by the Congressional Budget Office places the cost of renewable energy subsidies at about $20 billion per year. This is by no means the total subsidy since many states have their own mandates and subsidies. For example, many consumers in California are being charged 40 cents (at tier 5) per kilowatt hour for electricity that could be provided for 10 cents. By making electricity exorbitantly expensive, roof top solar panels become economical, thereby subsidizing the solar power industry at the expense of electricity consumers.

This is a good summary of the way the business of global warming actually works. Is it not long overdue to put this swindle to rest once and for all?