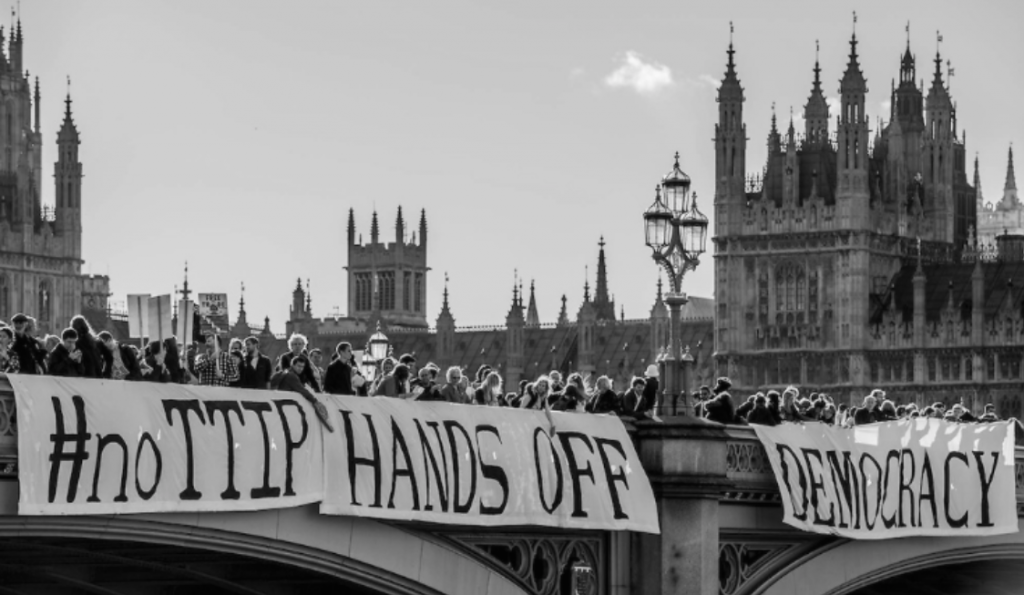 The Transatlantic Trade and Investment Partnership (TTIP) has its objectors – mainly the citizens of the countries involved in what can only be seen as confirmation of a corporate takeover. Governments have confirmed that democracy is no longer a principle worth pursuing.

Three million citizens have signed a petition voicing their opposition, of which 500,000 were from Britain alone.

One month ago at least 250,000 people marched in Berlin in protest against TTIP. Nearly 500 organisations have emerged with literally millions of followers who object to TTIP. The largest ever survey carried out by the EU Commission resulted in 97% of citizens being against TTIP in any form. All ignored.

As Rosa Pavanelli, Public Services International General Secretary puts it – “what has democracy come to when the community must rely on Wikileaks to find out what our governments are doing on our behalf”.

Various leaks only go to highlight the cat and mouse game being played by the nations negotiating TTIP that only raises further citizen concerns that secret meetings are only secret as they are not in the interests of people or individual nations.

A respected human-rights expert at the United Nations, Alfred-Maurice de Zayas, says “there is a hierarchy of agreements, and at the top is the UN Charter: in case of conflict between the provisions of the UN Charter and any other treaty, the Charter prevails.” In other words, trade treaties that lead to a violation of human rights — or breach any other obligation set out in the UN Charter — are legally invalid. Most countries have signed onto human rights treaties, but “they have also entered into trade and investment agreements that hinder, delay or render impossible the fulfillment of their human rights treaty obligations.”

He goes one step further “Allowing private arbitrators to disregard international and national law … is tantamount to a revolution against law.” The United Nations has actually called for a suspension of TTIP talks on the basis that its tactics used by multinationals in courts outside of public jurisdiction would undermine democracy and law.

The British government stance on this is well known. Their own website states “UK national income could rise by between £4 billion and £10 billion annually, with the main gains being generated by the liberalisation of non-tariff barriers.” Double speak for reducing standards to meet the common denominator and accede to corporate power.

So far, most of the opposition to TTIP has concentrated on the controversial Investor-State Dispute Settlement (ISDS) clause which will allow US corporations to sue EU governments for any decision that could harm their profits. But there is far more to TTIP than just secret corporate courts.

GlobalJustice.org.uk explains the dangers posed by the innocuously named regulatory cooperation chapter of TTIP (also commonly referred to as regulatory coherence) which could lead to a race to the bottom on key regulations in areas such as food safety and environmental protection.

Corporate lobbyists have expressed the hope that cooperation will make them so powerful that it will allow them to effectively ’co-write’ regulation with policymakers in each country, completely bypassing citizen concerns and previously enforced protection systems and laws.

GlobalJustice identifies that “to most people, regulations such as air pollution limits and food safety standards are common sense protections against dangerous threats. However, to many big businesses, these rules are just red tape or non-tariff barriers to trade (NTBs) which inhibit profits and are identified as such during trade negotiations. In fact, proponents of TTIP say that 80% of the supposed benefits of the deal will come from getting rid of these rules”.

It now appears that TTIP has in fact started to change previous protections in Europe without debate. For instance, the EU Commission has now dropped previous recognition of cosmetics standards. In essence, this is a serious deregulation of cosmetic ingredients and the amended paper with the TTIP agreement no longer contains a reference to “mutual recognition” of banned and authorised substances in cosmetics.

How bad is this one may ask. The EU Commission is now stating (in an attempt to put a good spin on the story) that it would accept banned chemicals in cosmetics, which would significantly risk lowering safety standards in the EU. More than 1,300 substances are prohibited in cosmetics in the EU, while only 11 are in the US. That includes lead in your lipstick.

How does the EU get away with this? While producing lipstick that contains lead would still be illegal in the EU, US companies will still be able to export it to the EU as long as it passes US safety tests.

It gets worse as it turns out that US officials have successfully used TTIP proposals to bully the EU into disregarding plans to ban 31 dangerous pesticides with ingredients that have been shown to cause cancer and infertility.

In a similar situation, the EU had previously banned the treatment of beef with certain acids being used to conceal poor and unhygienic practices common in the US. EU commission officials pressured MEPs in stating that TTIP negotiations will be threatened if the EU ban wasn’t lifted. The pressure was great enough that MEPs then repealed the ban.

The EU has now implemented a programme called “Better Regulation”. This is designed to reduce the regulatory burden and seeks to eradicate new rules on things like safe levels of chemicals. Trade unions say that Better Regulation has already been responsible for 100,000 deaths from cancer.

America, along with its ‘partners’ is designing a new world order all of its own. The TTIP agreement is as dangerous to world harmony as the cold war because that is what the agreement will become. Its aims are clear – to create a global economic arena outside of the WTO framework. Its sees TTIP as an opportunity as part of a much wider picture as a geopolitical economic strategy against the BRICS countries of Brazil, Russia, India, ChThese negotiations will end with 53 countries accounting for two thirds of the global economy. The treaty will create a new international legal regime that will allow transnational corporations to bypass domestic courts, evade environmental protections, police the Internet on behalf of the content industry, limit the availability of affordable generic medicines, and drastically curtail each country’s legislative sovereignty. US Senator Elizabeth Warren has said “They can’t make this deal public because if the American people saw what was in it, they would be opposed to it.”

The EU has admitted that TTIP will probably cause unemployment as jobs switch to the US, where labour standards and trade union rights are lower. It has even advised EU members, including Britain to draw on European support funds to compensate for the expected unemployment.

Britain’s most powerful TTIP advocate, an anti-democractic corporate public relations lobbyist masquerading as Prime Minister David Cameron has pledged to “fire rocket boosters” under the deal without public debate on the world’s largest agreement of its type ever considered.

David Cameron went to considerable length to assure people the NHS was not part of the deal. The government spent months trying to brush the threat of TTIP under the carpet but massive public pressure has forced the them to admit the NHS is part of the deal and therefore at threat from American corporations looking to cash-in from the multi-billion dollar health service as a profit centre.

Currently, there are around 500 cases of businesses versus nations going on around the world as a direct result of TTIP like agreements and they are all taking place before ‘arbitration tribunals’ made up of corporate lawyers appointed on an ad hoc basis, which according to War on Want’s John Hilary, are “little more than kangaroo courts” with “a vested interest in ruling in favour of business.”

John McDonnell, the UK’s shadow chancellor, has described TTIP as “toxic” and resulting in a huge transfer of powers to Brussels and corporate interests. What then if Britain leaves the EU?

TTIP has nothing to do with citizens or their rights. It is about forcing governments to see the whole of society from the single viewpoint of big business. The UN expert, Alfred-Maurice de Zayas is right – this is a revolution against the law.