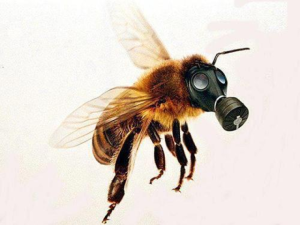 Most will wonder what I mean when I say Bayer AG, the German chemicals and drug company, the same one that just absorbed Monsanto, makes bee contraceptives. This is precisely what a newly-published, peer-reviewed scientific study confirms. Contraceptives for bees are not good for the world, no better than another product invented in the labs of Bayer, namely heroin. Bayer makes a class of insect killers known as neonicotinides. Their free use worldwide threatens bee pollination and the entire food chain.

Bees and birds contribute to the essence of life on our planet. A study by the US Department of Agriculture estimated that “…perhaps one-third of our total diet is dependent, directly or indirectly, upon insect-pollinated plants.” The honey bee, Apis mellifera, is the most important pollinator of agricultural crops. Honey bees pollinate over 70 out of 100 crops that in turn provide 90% of the world’s food. They pollinate most fruits and vegetables–including apples, oranges, strawberries, onions and carrots.

Bayer AG is the world’s largest maker of neonicotinoids, making the company an understandable match to takeover Monsanto with its own range of highly toxic glyphosate-based weed-killers such as Roundup. Neonicotinoids are a group of insecticides chemically similar to nicotine. They act on the central nervous system of insects. But also on bees and small song birds. Recent evidence suggests they could also affect human brain development in newborn.