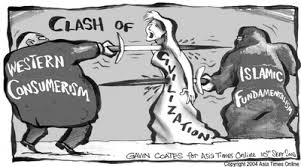 The credibility of all American politicians now requires acknowledging that America is engaged in a great war for survival – “the war against Islam.” Fear of “radical Islamic terrorists” requires our undivided attention. We’re to believe that the ugly and vicious violence of a very small percentage of the 1.7 billion Muslims around the world, without an army, navy, or air force, is on the verge of engulfing America and Western civilization. The claim is that the Western concept of Christianity, liberty, and free markets is threatened. If this is so, it speaks more about the weak support for these values than for the strength of a small group claiming to speak for all of Islam. It may not make much sense, but it provokes the fear required for war-mongering.

The popular belief that a gigantic clash of civilizations explains today’s conditions fits well into the propaganda efforts of the neocon inspired American Empire. One cannot deny that a group exists that associates itself with Islam and preaches violence in combination with extreme religious beliefs. Al Qaeda and ISIS do exist. Claiming that they alone are responsible for the great “clash” is purposely misleading. That misunderstanding is required by Western propagandists to gain public support for their wars in the Middle East, and for a continuation of the American Empire. Unfortunately, so far it has worked pretty well.

Fear is the tool used to galvanize a people into supporting war while sacrificing liberty. Exaggerations and propping up groups who falsely claim to represent 99 percent of Muslims, serves the interests of those in the West who want the clash of civilizations for their own selfish purposes. Current US and Western support for ISIS in Syria, even though it’s denied, is designed to remove Assad. This policy is in the tradition of our foreign policy of recent decades. Aligning ourselves with the creation of Hamas and the mujahedin (Taliban) is well documented.

The emphasis on a  clash of civilizations is more about ruthless pragmatism than it is of a great battle of two civilizations. Promoters of war must first find or create an enemy to demonize in order to gain the people’s support for stupid and illegal preemptive wars. The Iraq war was built on lies and fear-mongering. US leaders, prodded by the neoconservatives, continue to propagandize for a “crusade” against Islam in order to justify rearranging the Middle East according to their desires. Disregarding all previous failures in this effort is not a problem if the people can be convinced that the enemy is grotesque and threatening our way of life.

It’s strange, but 130 people killed in Paris has served the purpose of throwing reason to the wind, and the majority of Americans have become anxious for a showdown with Islam no matter how many lies have to be told and people killed.