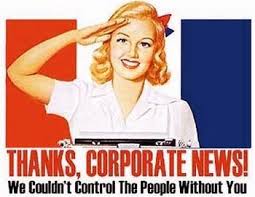 Whistleblowers, Ecocide, top secret trade deals, and shady ties between the Islamic State and the West’s closest allies…here are a few hot topics the mainstream media barely covered in 2015.

1. Any Tragedy That’s Not Western-Centric

The outpouring of fury, despair and grief by the corporate press over the November 13 Paris attacks highlighted the bias of the mainstream media towards Western victims of terrorism. There were two suicide bombings in Lebanon the day before the events in Paris, killing 37 and wounding 180, but they were not mentioned much in the sensationalist coverage of France’s tragedy, nor were they mentioned in the minutes’ silences and vigils conducted across the Western world in the aftermath.

From the horrors of the Congo’s bloody civil war to Erdogan’s persecution of Turkish Kurds, from Boko Haram’s ongoing reign of terror in Nigeria, Chad, and Cameroon to the plight of Sudanese refugees, the mainstream media seems to pick and choose which human lives deserve our empathy and which aren’t quite so important.

As we previously reported, the Indonesian wildfires that caused devastation to the country’s people and wildlife last year were largely ignored by the mainstream media until several months after the devastating event began. The fires were started by loggers to clear the way for controversial palm oil plantations and caused health problems for over one million people. The World Bank estimates that the fires destroyed 2.6 million hectares (6.4m acres) of rainforest between June and October, costing $16.1bn and causing untold loss of life to the endangered animals who depend on the forests for their survival. Terrified orangutans fleeing the disaster were abused in a sickening way by some Indonesian villagers.

Ecocide on this scale should have been one of the biggest stories of 2015, but with the exception of Guardian columnist and environmental activist George Monbiot (who attacked his industry for censorship of the event), the tragedy was largely ignored to protect corporate interests.

The terrorist attacks in Paris were used as justification by the French, British and German governments to join military strikes in Syria. They were also used as justification by the French government to severely restrict freedoms at home. As we reported, immediately after the terrible events of November 13, the French government began closing down alternative news sites. The President also declared that anyone’s house could be searched without a warrant, websites could be blocked without warning, and citizens could be put under house arrest without a trial. Activists hoping to march in Paris at last month’s Climate Conference were disappointed to learn that France’s state of emergency also included a ban on protests. Some French politicians are pushing to install GPS trackers in rental cars, re-write the Constitution to allow for martial law, block free wifi and Tor, and combine state databases, which would give the state access to citizens’ personal medical records.

Amnesty International, along with many French bloggers, expressed concern that the Government had imposed martial law in response to the terrorist attack. They have a point: Isn’t a restriction of freedoms at home exactly what extremists would want? John Dalhuisen, Amnesty International’s Director of Europe and Central Asia, said in November: “It is a paradox to suspend human rights in order to defend them.”

Many bloggers agreed and said they were scared about the situation in France. One wrote:

I’m currently living in Paris, the city where some fanatics killed people because they were listening to music, watching a football match, or simply enjoy beers in a bar. I was living in the neighbourhood of where those tragic event happened. Now I’m scared.
I’m not scared of terrorists.
I’m scared of my own country.
I’m scared because different is now starting to mean dangerous.

The anonymous man goes on:

It seems that being an ecologist is enough to get house arrest. Before its 20th November reform, this sentence was reserved to people ‘whose activity is dangerous’, now it’s ‘serious reason to believe that his behaviour constitutes a threat’. We’re almost at the thought crime.

France’s emergency measures were reported by the mainstream media, but there was little analysis or debate about whether they are justified: the myth we have to trade in our freedoms to get security has become a normal part of everyday life.

4. The Truth About ISIS

In 2015, True Activist reported on a growing body of evidence that strongly suggests the Islamic State:

The mainstream media continues to peddle the tired old narrative that the Western coalition are in Syria specifically to fight the I.S. If this were true, it would be logical for these countries to support Russia in its war against the terrorist organization. Yet coverage of Vladimir Putin in the corporate press continues to be entirely negative, despite the fact Russia single-handedly took out 40% of the Islamic State’s infrastructure in just one week. The revelations above have been completely censored by the corporate press, which is becoming less credible by the day.

5. The British Parliament Voted Against Democracy

Last month, an English politician stood up in the Houses of Parliament and gave a speech calling for electoral reform. His request, backed by thousands of citizens, was blocked. The UK has an archaic system of voting which is unfit for purpose and entirely undemocratic: after unpopular Prime Minister David Cameron won the 2015 election with just 36% of the vote, millions of British people felt cheated. A petition was launched to demand proportional representation rather than the co-called ‘first past the post’ system, which benefits the major political parties but never the alternatives. In short, Britain is not the fair, democratic nation it pretends to be. News that Jonathan Reynold’s request (video here) for a fairer system was rejected should have been a big story in the UK, but the British media barely covered it.

TTIP, in particular, is of huge concern. As we have reported, the deal threatens to allow corporations to sue governments who don’t do as they are told, kill online privacy, make fracking standard procedure across 28 countries, privatize European health systems, force GMO food on unwilling citizens, strip us of our civil liberties, and ensure that corporations have control over the European parliament.

Julian Assange called TTIP “The most important thing happening in Europe right now,” which is why Wikileaks is raising a 100,000 euro reward for any information relating to the deal. The site says of TTIP:

It remains secret almost in its entirety, closely guarded by the negotiators, and only big corporations are given special access to its terms. The TTIP covers half of global GDP and is one of the largest agreements of its kind in history. The TTIP aims to create a global economic bloc outside of the WTO framework, as part of a geopolitical economic strategy against the BRICS countries of Brazil, Russia, India, China and South Africa.

Considering the impact all three of these trade deals will have on democracy, human rights, food safety and the environment, public awareness should be widespread. Worryingly, a huge number of people know next to nothing about TTIP, TISA and TPP.

Far from questioning the secrecy of such important agreements or inciting a crucial public debate about whether these deals are ethical and democratic, mainstream coverage has glossed over the negatives and generally provided a biased view of the benefits of this corporate take-over of the world.