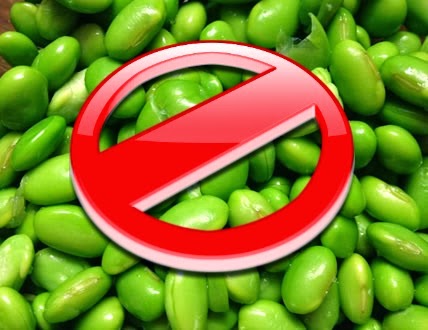 Soy has become a major source of toxicity for human beings, especially in the last three decades. Not only is more than 99% of soy genetically modified, but sources labeled organic or non-GMO are often exposed to the same problems as conventional soy. If you consume processed foods, soy is almost impossible to avoid. With the exception of wheat, there are few foods that are causing as many health problems as soy in the food supply. Here are 12 reasons to avoid any kind of soy.

Phytic acid is present in the bran or hulls of all seeds and when we compare the phytate of soy to many other types of beans and nuts, the percent mass is not that far off, but that’s not the problem. The problem is how much we are consuming. Most people stuck on the soy bandwagon are consuming far more phytate by the sheer volume through mass consumption of things like soy milk, tofu, cereals, and processed foods. It doesn’t even compare to the amount they would consume through seeds and nuts. The effect of phytic acid on iron absorption has been thoroughly studied. As evident in a study in the American Journal of Clinical Nutrition, as phytic acid increases, it has a diminishing impact on iron while inhibiting its absorption. This applies to almost every major mineral including zinc–one of the most important minerals for the human body.Two billion people may now have zinc deficiency. Phytates bind to zinc and thereby decrease its bioavailability. Phytic acid levels in soy reduce assimilation of calcium, magnesium, copper, iron and zinc.

2. Soy Causes Growth Problems and Even Cancer In Children

The phytic acid in soy is not neutralized by ordinary preparation methods such as soaking, sprouting and long, slow cooking. Consequently these high phytate diets have caused growth problems in children. Combined with the presence of both phytoestrogens and arsenic, soy-based formulas are a disease promoting ticking time bomb for infants. A study published in the peer-reviewed journal The Prostate, revealed that humans exposed to a combination of both toxicants were almost twice as likely to develop cancerous cells in their prostate. While it is established that both arsenic and estrogen can cause cancer, the research raises concerns about the dangers of chemicals in combination, and the efficacy of regulations that are established by testing one chemical at a time. True cancer of the prostate, carcinoma, is seldom seen in infants and children, but other forms of malignant tumors may develop and more cases are appearing in developed nations where the link appears to center around soy infant formula. While many claims have been made about the health benefits of these estrogen-like compounds, animal studies indicate that soy (both conventional and organic) contain powerful endocrine disruptors that alter growth patterns and cause sterility. Soy formula is also laden with toxic chemicals such as aluminum and manganese, which can cause both physical and mental health problems, learning disabilities, brain damage, and behavioral problems. A study published in the Proceedings of the National Academy of Sciences found that the highly concentrated phytoestrogens in soy formula weaken the immune systems of babies. Toxicologists estimate that an infant exclusively fed soy formula receives the estrogenic equivalent of at least five birth control pills per day.