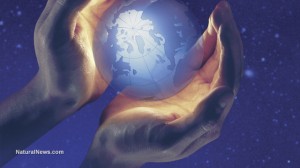 Clearly, something has shifted away from balance. At first, I thought these events were lining up just by coincidence, but now I’m convinced there’s a common cause behind it all. Something, in other words, is driving humanity into a state of madness. But what is it?

I’ve pondered this issue at great length, and I’ve come to the conclusion that we, the more sensitive members of the human species, are sensing and reflecting what might be called “Gaia’s psychic scream” — the reverberations of an intricate web of life experiencing extreme suffering as human civilization plunges the planet toward ecological collapse.

All the superbugs and viral pandemics coming out of the woodwork are merely a symptom of that ecological collapse. The extreme droughts, earthquakes, floods and sudden sinkholes are yet more signs that humanity has pushed this global ecosystem beyond its natural limits.

Humanity has poisoned the oceans with mercury, blanketed the land with remnants of radiation, devastated genetic diversity with monoculture farming, strip-mined the hills and valleys for industrial metals, over-fished the oceans into a state of near-collapse, sprayed deadly chemicals on crops that have nearly wiped out honey bee pollinators, and bulldozed endless acres of rainforest to make way for GM soy fields.

The resources of the planet are dwindling. Fossil fuels, fossil water, old growth forests and natural artesian springs are all disappearing by the day. The shocking loss of living species has scientists declaring our planet to be in its “Sixth Great Extinction” event. Genetic pollution from biotech agriculture is now irreversible, and mysterious diseases are sweeping through banana crops, orange crops and even the horse populations of central Texas.

Because we are connected with nature, we feel this devastation in our hearts and minds

I believe we are all connected with nature. As nature suffers and dies, we feel the pain in our hearts and minds. We feel the suffering of the aquatic ecosystem as more agricultural chemicals are washed downstream and empty into the oceans. When life dies around us, those of us with empathy and compassion feel that pain.

It is my belief and observation that humans are becoming more agitated and frightened today precisely because the death and destruction of our natural world has reached a breaking point. The destruction being unleashed upon our world is sensed in our own hearts in the same way a pocket radio device can tune in and sense a broadcast station many miles away.

Gaia’s “psychic scream” is becoming so loud and so urgent that each day more people are affected by it. For some, they feel uncertainty and fear. Others feel anger and agitation. Still others experience sadness and depression. It is important for us all to recognize that because we are tuned in to nature, we are sometimes pained by its suffering. Yet the ability to feel compassion and empathy for the living world around us is a great gift… and a great burden. Having heard the desperate cries for survival, we are simultaneously burdened with doing our best to help protect Mother Nature from the poisoners of our world who are destroying her.