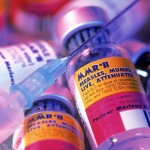 Breaking news: According to two Merck scientists who filed a False Claims Act complaint in 2010 — a complaint which has just now been unsealed — vaccine manufacturer Merck knowingly falsified its mumps vaccine test data, spiked blood samples with animal antibodies, sold a vaccine that actually promoted mumps and measles outbreaks, and ripped off governments and consumers who bought the vaccine thinking it was “95% effective.”