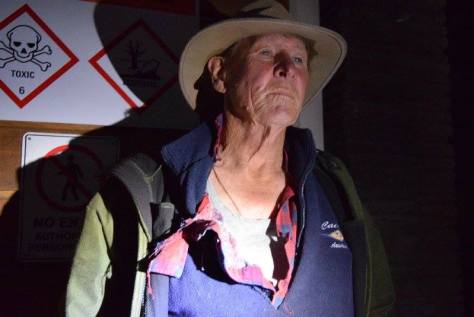 Author and conservationist, Graeme Sturgeon, was assaulted, his clothing ripped, his face left bloodied, and his car doorhandle broken, by DoC employees on 17 October 2017.

“…the driver’s door was opened, he was hauled out, and punched in the face by a DOC contractor, Mr X, without warning or explanation.”

There were two witnesses, Dr. Wendy Pond, and artist Diana Halstead. They had been told DoC were loading 1080 poison in the middle of Whitianga and had gone to investigate. All three are senior citizens in their seventies. They had done nothing wrong and were in a public car park and were amazed at the scene that confronted them.

I am told the 1080 poison had apparently been stored in the DoC office in the CENTRE OF TOWN, for approximately six weeks, unbeknown to the Mayor of Thames, Coromandel District Council, maybe also unknown to the Fire Chief, and apparently unknown to the other tenants of the building. DoC were caught out breaking all the rules, in other words !

I should add that the New World Supermarket is across the road, Countdown is 24 Joan Gaskell Road, so virtually next door. The 1080 poison was surrounded by food outlets in other words.

As well as this the 1080 poison was apparently stored in another tenant, Platinum Homes’ storage area. Platinum Homes, I am told, knew nothing off this and are furious.